Luis Reece scored his second century of this year’s Royal London Cup campaign to set up a Derbyshire victory by eight wickets against Northamptonshire on a day of records and big runs at Wantage Road.

It was Derbyshire’s highest successful run chase in all List A cricket, beating their previous best of 309, also against Northamptonshire, in 2017.

Reece (106) shared a mammoth opening partnership worth 204 with his captain Billy Godleman (87) as Derbyshire chased down 312 to win. It was a record stand in List A games between these two sides and the highest for any Derbyshire wicket beating the previous best between Kim Barnett and Chris Adams in 1997.

When both fell, Derbyshire were behind the run rate but Shan Masood (53) and Harry Came (44) kept up the pace, making short work of the remaining runs in a blaze of boundaries with seven balls to spare.

That meant subdued celebrations for Lewis McManus, who had hit his maiden List A century (107 off 111 balls). The keeper shared a stand of 161 with Tom Taylor (75 off 54 balls) who also hit his highest score in all formats in Northamptonshire colours.

Statisticians could take delight at least. It was the biggest Northamptonshire List A partnership for any wicket against Derbyshire, beating the previous best of 158 between David Sales and Alex Wakely in 2012. It was also the highest fifth-wicket partnership in List A cricket for Northamptonshire against any opposition, beating the previous record set by Allan Lamb and David Capel.

Derbyshire made an immediate breakthrough when Ben Aitchison struck in consecutive overs to remove the dangerous pair of Ricardo Vasconcelos, who was caught off a top edge, and skipper Will Young who edged to the keeper.

After putting on 59 with McManus, Zaib (62) reverse swept Mattie McKiernan straight to Mark Watt behind square. It was to be the last wicket for some time as Taylor joined forces with McManus.

McManus’ first 50 included just three boundaries but he ran sharply between the wickets and reached the milestone off 79 deliveries. From there he accelerated with the rest of his runs coming off just 32 balls. He hit Watt straight down the ground for six and hooked Nick Potts and Conners behind square for two further maximums. Conners went the distance again when McManus struck him high over deep midwicket and smashed him down the pitch.

Taylor smote Watt over long-on for six but was content to let McManus have the strike initially. He took a liking to Potts though, playing a stinging drive through the covers and whipping him through midwicket. He crunched Connors down the ground for four and scooped him over the keeper to bring up his fifth List A half-century. The carnage continued when he swung Reece high over long-on into the stands for six.

The pair were finally parted when McManus was run out while Taylor fell when he missed an attempted scoop and was bowled by Conners.

Derbyshire got off to a bright start in the chase. Reece soon found the boundary, playing a brace of perfect on-drives down the pitch off Taylor, scooping him for another boundary and whipping Nathan Buck over backward square leg for six. He advanced to his half-century off exactly 50 deliveries with his eighth boundary.

Godleman too was timing the ball beautifully through the covers and reached his half-century by pulling Buck aggressively for four.

The Falcons otherwise breezed past 150 without loss in the 26th over with neither batter looking troubled or needing to take many risks, most of the boundaries coming along the floor rather than through the air. Northamptonshire’s largely inexperienced attack seldom looked threatening after almost drawing the edge in the opening overs. Wickets looked most likely to come through spin with Zaib having three lbw appeals turned down in two overs.

Derbyshire passed 200 in the 35th over but when Reece attempted to force the pace, coming down the pitch to Taylor, he could only pick out Gay who took an excellent tumbling legside boundary catch. He had faced 120 balls and hit 13 fours and one six.

Four overs later Godleman (99 balls) departed too, run out thanks to some sharp work by Sales with Derbyshire still needing 91 with nine overs to go.

Shan Masood held the key to Derbyshire’s hopes and he came out determined to play his shots, whipping a legside half volley from Sales off his pads for six, supported by Came who struck two big sixes as the pair added 50 in five overs to leave Derbyshire needing 36 off the last five.

Get your first look at Dead Island 2, launching February 3 on PS4 & PS5 – PlayStation.Blog 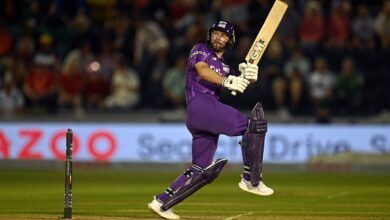